Another depressing 4:1 loss, though MKB had an average rating of 143 against our more restrained 112 and is likely to be the clear winner of the division when the end of the season arrives. Quite a mixed bag of results:

·        On board 1, I had probably the dullest game of all time, but despite a lack of space or much counter-play I managed to hold on for a draw, which my opponent offered and was gratefully accepted. A decent result given the grading difference.

·        On board 2, Peter Gill had a great game and won an exchange, but ran out of time to convert it and settled for a draw. A great result, as he was giving away 33 grading points.

·        On board 3, Nigel had a self-declared “bad one” after reaching a position that wasn’t too uneven, and wasn’t able to retrieve the game.

·        On board 4, Peter Housden reached a strong-looking position, but sadly miscalculated, losing a bishop and with it the game.

·        On board 5, Tony lost the exchange and went for a protracted adventure with his king, crossing the board from one side to the other, but unfortunately losing a queen on route. It should be noted that he was giving away 54 grading points.

So overall, a result that could have been closer, but against a very strong team. Things can only get better!

Nick scored the decisive point over his very strong opponent to give the B team a good victory over Northampton. He has annotated the game which is well worth a look.

Thoughts from the other boards:-

Congratulations to the Devon Chess Club  on pipping us to the prestigious ECF Website of the Year 2014 award.  This is the second time Devon has won the award in seven years.   Further details may be found here.

A couple of top quality recent games have been added by two of the club’s best players – Paul shows that discretion is the better part of valour when it comes to overcoming Mr Pribanich whilst Steve demonstrates the complete opposite to overcome top opposition in foreign climes!

Bedford A opened their season with a comfortable win against a heavily outgraded Northampton. Gerry, substituting for Steve Pike, soon won material and was never troubled. Mike dominated his uncastled opponent throughout. Ravi’s opponent soon had an inferior position but kept finding resourceful defences. However, Ravi was always one step ahead and eventually simplified to a won king and pawn ending. On Board 2 (see game) Branko missed an equalising chance in the middlegame and was completely lost thereafter. Steve Ledger looked to be in serious trouble early on with an undeveloped kingside. However, he scrambled his way to an ending where his queen defied winning attempts by Chris Ross’s two rooks. Shorter of time in the rapidplay finish and having to move the blind player’s pieces as well as his own, Steve was relieved that Chris sportingly declined to ‘flag’ him.

The D team got off to a rocky start to the season with a bit of a walk over from the Ou. Things seemed to be looking up when their board one didn’t show up at the start of the match, but when he did, Alex didn’t last very long. John, in his own words “did badly in the opening, flourished in the middle game and lost the end game.” Neil lasted the longest but also fell, and Tony put up a valiant fight in his debut Bedfordshire league game, going a queen down but winning back a few pieces for it, but was worn down in the end. I managed to get half a point out of a game which got to the end game by move 15, but overall, it can only go up from here! 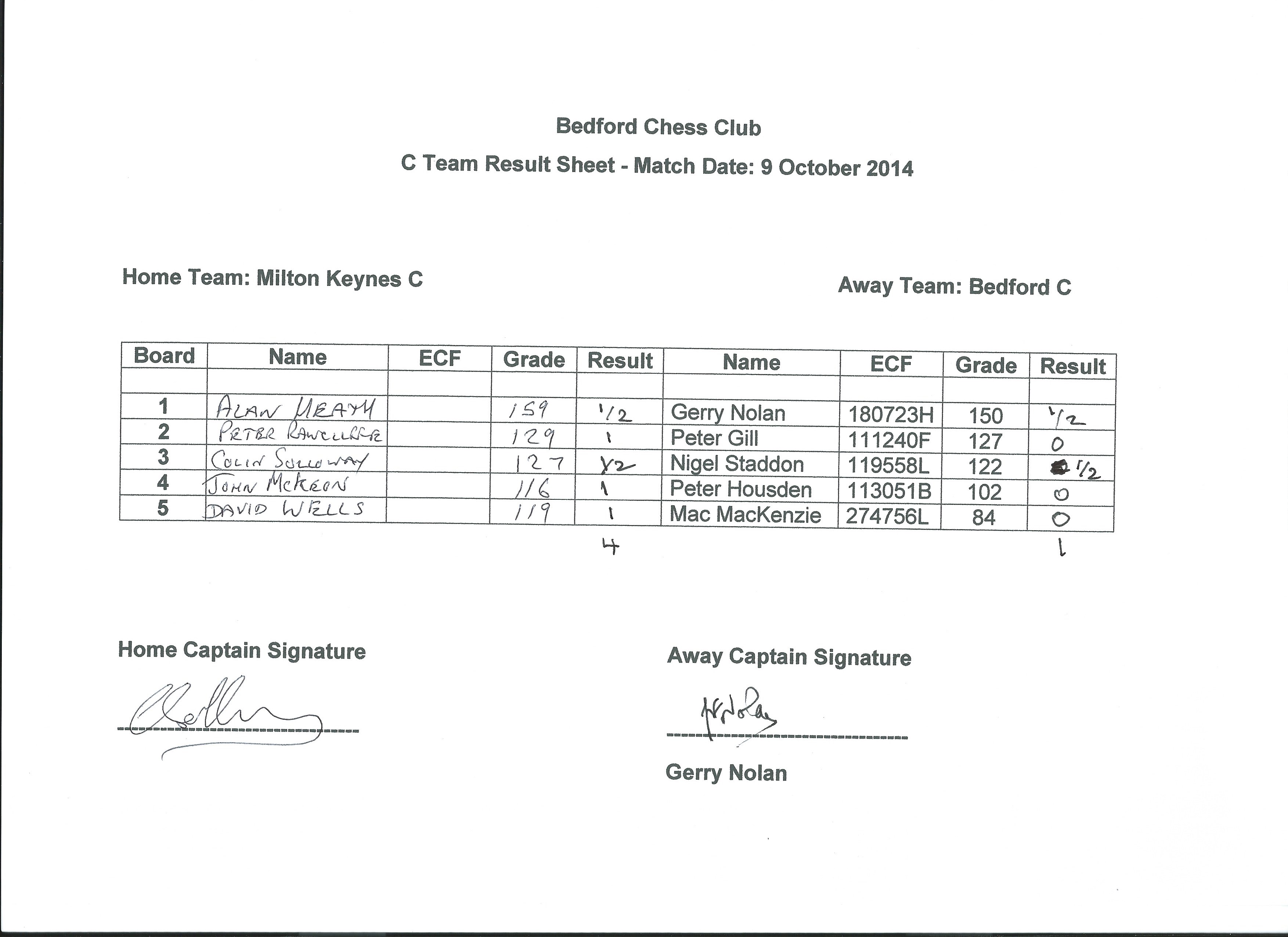 I’m afraid there are no mitigating factors! I was ahead most of the way through and missed a probable win just towards the end by ignoring a bishop check that would have won me a pawn and probably the game, but he let me have a pawn earlier on, for little compensation so a draw by default was probably a fair result. Nigel managed a draw in a tricky situation where both players had only seconds to go and they decided a draw was the best result given the lack of time. Peter Gill said he went wrong in a drawn looking position, while Peter Housden had an up and down game, but went wrong towards the end. Poor Mac was out-graded by 35 points, so his game result was in line with that. All told the MKC team averaged a rating of 130, against our 117, which seems quite high for a C team! We’re looking forward to the MKB team game in a couple of weeks

The C and D teams got their seasons under way on Thursday, each with a new captain at the helm.  I understand both teams lost but no furthers details as yet.  More to follow soon…..!?

Meanwhile, division 1 shows no signs of being any less cagey than last year – 6 players now share the lead on 1/2 !

The club was buzzing last Thursday when teams from all the other Beds League Clubs came to compete in the rapid-play Cordon Trophy. We entered A, B and C teams and also lent a player to Northampton.

Our A Team looked very strong but their prospects were severely dented when Steve Ledger could not save his game in an exciting time scramble having blundered a piece against Alex Taylor, Paul Habershon was held to a draw by Gerry Nolan and Ravi Arulnandhy was crushed (so John claims) by John Harbour.You just had to see John to know he was, well, rather pleased with himself– he won all four games on board 3 for the C team and claimed that his toughest was against Tom Moloney of Northampton (grade c75).  Mike Botteley, on board 4 for the A team, easily won all his games. Playing on board 1 for the B and C teams respectively Alex and Richard Bodily (who just came down to watch) put in stand out performances with 2.5 and 3 respectively. New members Tony Lawrence and Clovis Rees had a tough introduction to Beds Leagues chess. Tony scraped home in a hard fought individual encounter, and neither looked out of place against experienced and higher graded players.

Adrian Elwin’s amazing efficiency in organising the pairings for each round, whilst resolving the occasional dispute, and what was by common consent a very satisfactory venue, were the keys to an excellent evening.  The outcome was a win for Milton Keynes A, with Leighton Buzzard second, and our A and C Teams (really) third and fourth.

So now its down to League and Club tournaments. All prospective team members should  soon receive the fixtures from the team Captains but there are no League matches next week so a good chance to get Div 1 and Div 2 matches played.

Neil has added five more games to his collection of British Chess Masterpieces which has been renamed to include memorable disasters – this surely makes immortality possible for all of us!?

He has also contributed a new game to the ‘Bedford’ collection – Phil Roe demonstrates a proper Queen sacrifice.